Shares in Group Compose
No social links are set. 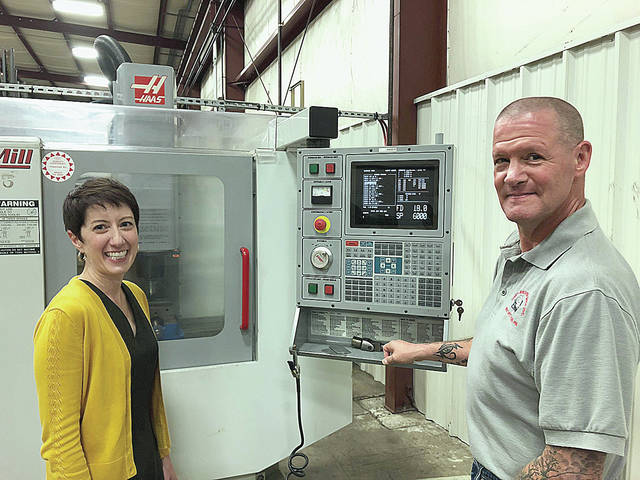 WEST PITTSTON — A new collaboration between business and academia will train a new group of recruits for a key manufacturing skill that is much in demand.

CNC machining training will be offered at Don’s Machine Shop here in conjunction with Scranton-based Johnson College of Technolgy.

Don’s Machine Shop president Donald Eifert Jr., whose father founded the business in 1981, said the partnership arose as he encountered difficulty in recruiting.

“The tech schools do not seem to be putting out kids like they used to when my father started the business,” Eifert said.

“In the past few years we’ve had a lot of trouble finding new employees,” he added. “It’s not just our shop, it’s every shop has this problem, we can’t find people.”

This is particularly a problem for Eifert because his workforce is getting older and many are nearing retirement age, he explained, adding that many people hired by his father proved to be long-term employees.

“When people start working at our facility, they tend to stay here,” Eifert said. “We take care of our people very well. Our equipment is updated constantly, the whole facility is air conditioned, and it’s very, very clean. We’re particular about that.”

Enter Johnson College. Eifert, who employs 33 people, approached school officials and found them receptive to working together on a training program.

“We pride ourselves on saying that when industry calls we answer,” college President and CEO Katie Leonard said. “We come up with creative solutions to be able to fill some of the workforce gaps.”

Leonard said some of that gap has resulted from negative stereotypes about manufacturing work.

“What I’ve seen over the last several years is that the perception of these types of jobs is finally starting to change,” Leonard said during an open house at Don’s Machine Shop to promote the classes.

“When people think of a machine shop it’s dark, they think it’s dingy, dangerous. As you can see, though, it’s nothing like that. It’s bright, it’s clean and they have some of the latest machines around,” she added.

CNC, or Computer Numerical Control machines, are used to manufacture precision products and components for a variety of industries, from automotive and aerospace to medical equipment.

As part of the program, students will be taught the basics of traditional machining before moving on to computerized CNC training.

“We want to make sure these people know math, can read a blueprint, can read micrometers, calipers, and when they come out, they’ll have the fundamental principles to be successful for themselves and their employer,” he added.

As he and Leonard pointed out, they’ll also have the skills needed to set them on a career path in a field with good-paying jobs — typically starting around $35,000 and ranging up to about $68,000.

“It is really a great opportunity for people who are either starting out in the job market or who want a change of career,” Eifert said.

WHAT YOU NEED TO KNOW

• Cost of the class is $6,250. Financial assistance may be available for those who qualify.

Giant Rabbits Instantly Fall In Love With Their New Baby...